In Episode 4, Rick journeys to Extremadura and created marvellous Spanish creations and was even treated to some delicious dishes cooked by the locals in Trujillo. We loved Rick Stein’s programme and have written a short recap for you in case you missed the episode. If you have missed it, you can buy it from Amazon here.

During the show, Rick Stein meets a local resident, Victor who creates a simple dish called migas. Migas is made with strips of belly pork, peppers, chorizo, garlic and topped with breadcrumbs. It’s a delicious dish – we’ve even tried it ourselves! Victor also produces his own wine and olive oil.

One of the dishes that Rick creates is a lentil dish with Serrano ham and pimenton. Serrano ham is made with white pigs instead of black pigs (which is where iberico ham comes from). This simple yet hearty dish also contains carrots and tomatoes. The use of pimenton spice gives it a wonderful, smoky kick.

Another highlight of the programme is the wonderful white gazpacho, ajo blanco. Ajo blanco is made with garlic and crushed almonds. It is topped with olive oil and peeled green grapes. This is one of the most perfect dishes to have on a hot Spanish day in Trujillo. It is also one of the recipes featured in Rick’s new book that accompanies the television series.

One of the highlights of the episode is the amazing iberico ham producers. Iberico ham is among Extremadura’s most famous exports and internationally renowned delicacies. Black Iberian pigs are fed on acorns in Extremadura’s dehesa woodlands and then carefully cured over several weeks, months and even up to seven years!

This unique farming and curing process creates the most delicious ham; it is famed for its sweet and delicate flavour and a texture that melts in your mouth. A single joint of the finest iberico ham can be worth thousands of pounds! Visiting and tasting iberico ham is definitely a highlight for any trip to Trujillo. 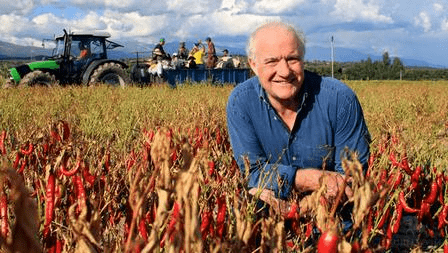 The programme also highlights the colourful fields of pimenton, a chilli that is one of the quintessential flavours of Spain and used for creating paprika – Spain’s most expensive spice after saffron. Trujillo and Extremadura are also famous for several tasty Spanish cheeses (the National Spanish Cheese Festival is hosted in Trujillo) and local harvested wine.

Extremadura is also famous for being the birthplace of several conquistadors that conquered much of South America during the 16th century. Trujillo is hope to Francisco Pizarro and his brothers; Pizarro is most famous for conquering Peru.

In the programme, Rick visits the magnificent Santa Maria de Guadalupe monastery, declared a World Heritage Site by UNESCO. Famous for its stunning architecture and Black Madonna, it was here that Christopher Columbus gave thanks when he returned after his successful exploration of the New World.

Guadalupe is just one of the many stunning attractions, towns and villages easily accessible from Trujillo. You can also visit Caceres, Merida, Yuste, Seville and Jerez in Portugal. Trujillo is only a couple of hours drive from Madrid and due to its proximity with Portugal, you can also drive to Jerez. Trujillo makes the perfect destination or stopover during a driving holiday in Spain.

We have a range of beautiful villas available to rent all year round for anyone wishing to visit Trujillo or Extremadura. Villa Moritos, Villa Martires and Villa Piedras Albas are all perfect for group or family bookings and make a great destination for any driving holiday in Spain.

For any food lovers reading, we also have a range of art and cooking holidays available throughout the year. You’ll be taught by experienced, local chefs and can also enjoy fantastic tuition for your art and painting. Please call us on +44 207 385 5345 or email us info@trujillovillasespana.com to make a booking or find out more.