Following the success of the inaugural festival a year ago, the city of Trujillo will host its International Music Festival for the third year in a row. The festival, which runs from the 18th to the 20th of July, features a wide selection of musicians performing in the magnificent cloisters of the Palacio de los Duques de San Carlos.

The festival kicks off with and family concert, followed by ‘The Genius of Beethoven’, performed by the Youth Orchestra of the International Festival City of Trujillo. The orchestra is made up of 30 of the most talented young musicians from all over Spain. 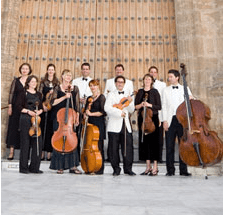 The next evening sees The Soloists of London Quintet performing ‘Viennese Romantics’ with established pianist Luiz Fernando Péres. The Soloists of London are renowned British musicians who are members of orchestras such as the London Symphony Orchestra or the Academy of St Martin in the Fields. On the final evening, all 11 Soloists of London will accompany the brilliant soloist Noelia Fernández Rodiles in a programme entitled, ‘Mozart, composer and inspirer’.

The location for this festival is the historic Palacio de los Duques de San Carlos.  Built in the 16th century, this venue is full of cultural significance for the city of Trujillo.  Today, it serves as a convent for the Jer?nimo order, in addition to being open for visits.

The palace is an architectural marvel complete with brick chimneys built in Mudéjar style.  Inside, the two main attractions are its classical patio and a grand staircase of granite.  Atop the staircase is a painting of a two-headed eagle, the family crest of those who used to reside here.

If you haven’t already marked the dates in your calendar, we encourage you to do so. This festival is an essential part of the summer cultural calendar in Extremadura. Don’t miss your chance to listen to some of the world’s best classical performers in a romantic, medieval setting.

For more information on the festival and the performers, visit their website.