Named a ‘National Monument of Historic and Artistic Buildings’ in 1970, Trujillo, Spain is the ideal holiday destination for vacation goers wanting to step back into history. Dating back to 600BC, the walled hilltop town, which overlooks miles upon miles of unspoilt countryside, and surrounding areas has much to offer, from delicious authentic Spanish cuisine to Monfrague Park Nature Reserve.

To the North of the town stands the impressive Trujillo Caste. Built between the 9th and 12th centuries, the castle was constructed over an old Muslim stronghold. To the South, the ancient town has numerous medieval and Renaissance buildings, thanks in part to Spanish Conquistadors returning from exotic adventures and colonising quests who built magnificent residences to celebrate their new found wealth.

The most notable of conquistadors was Francisco Pizarro. Born in Trujillo, Pizarro claimed the Inca Empire in the name of his country and also founded Lima. In the Plaza Mayor, or main square, in Trujillo, visitors can bear witness to his likeness in the form of a bronze sculpture that was presented to the city in 1926. This tribute to Francisco Pizarro highlights the significance of his legacy to the populated city. Other famous Conquistadors such as Hernan Cortes, Diego Paredes and Franciso de Orellana were born in Extremadura, the autonomous community where Trujillo is located. The legacy of their conquests can be seen throughout Trujillo, with many of the buildings unchanged or harkening back to the town’s illustrious past.

Trujillo’s most famous son, Francisco Pizarro, was the architect behind the famous Palace of the Conquest, situated in the Plaza Mayor.  The palace is one of Trujillo’s most recognizable structures.  Built in a Renaissance fashion in the 16th century, the palace features elaborate facades highlighting Pizarro’s glorious conquer of Peru.

Religion has undoubtedly played a sizable role in defining the Spainish town of Trujillo. Churches, monasteries, and shrines loaded the towns. There are seventeen churches and many convents located in Trujillo.  These numerous religious sites play a large role throughout Trujillo’s calendar year, especially during The Chiviri, the culmination of Holy Week, which ends with Easter Sunday. During this celebration, locals proceed from their respective church to the Plaza mayor, carrying ornate floats that represent each parish. For those wanting to be immersed in traditional Spanish festivities, The Chiviri is the best time to visit Trujillo.

Being a walled town with a defendable castle appears to be evidence that these architectural points were created in defence of Christianity. These physical manifestations, which are guarded now historical monuments, remain important in the political history of the town and region being deeply grounded in a Catholic tradition.

Today the town’s full-time residents are happy to spend their days in a slow-paced manner. When visiting, holiday goers will notice old women sweeping their doorsteps to a sheen and jolly men munching tapas. However, the city’s quietness can be interrupted during certain weekends when visitors from other Spanish regions or from other countries descend upon the town, to experience the antiquity of the place.  The town truly becomes busy during the annual National Cheese Festival. The important national cheese competition is hosted in Trujillo’s Plaza Mayor. The square is full to bursting and all the different eateries, many facing the square, play host to cheese lovers the world over.

Many of Trujillo’s restaurants, delicatessens, and bars sell regional specialties. The local ham, pata negra, is made from the black pigs that stay in the surrounding acorn forests. It’s a siren call to foodies. Then, don’t skimp on eating chorizo, the local cheese manchego with olive oil and white asparagus.

The cheese festivity is performed in the Plaza Mayor (Main Square). Famed because of its distinctive nightlife and atmosphere, the Square is also home to Trujillo’s most recognizable landmark – the amazing statue of Francisco Pizarro, the Conquistador, who conquered Peru in the 16th hundred years. The square is stuffed with eateries and pubs – many letting you eat on the square itself. 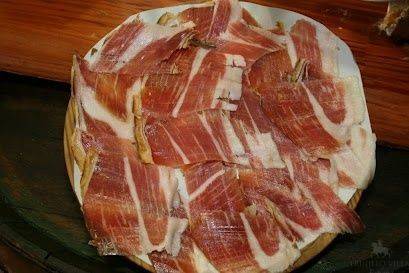 So what are you waiting for? Come visit the beautiful historic town of Trujillo and stay with us. Trujillo Villas Espana offer luxurious, refurbished villas to rent, many dating back to the formation of the town, that can become your home away from home.