Trujillo sits in the centre of Jamón country (Jamón being Spanish for ham) and when choosing to visit this region, you’ll be treated to the region’s delicacy of Jamón Iberico de Bellota. 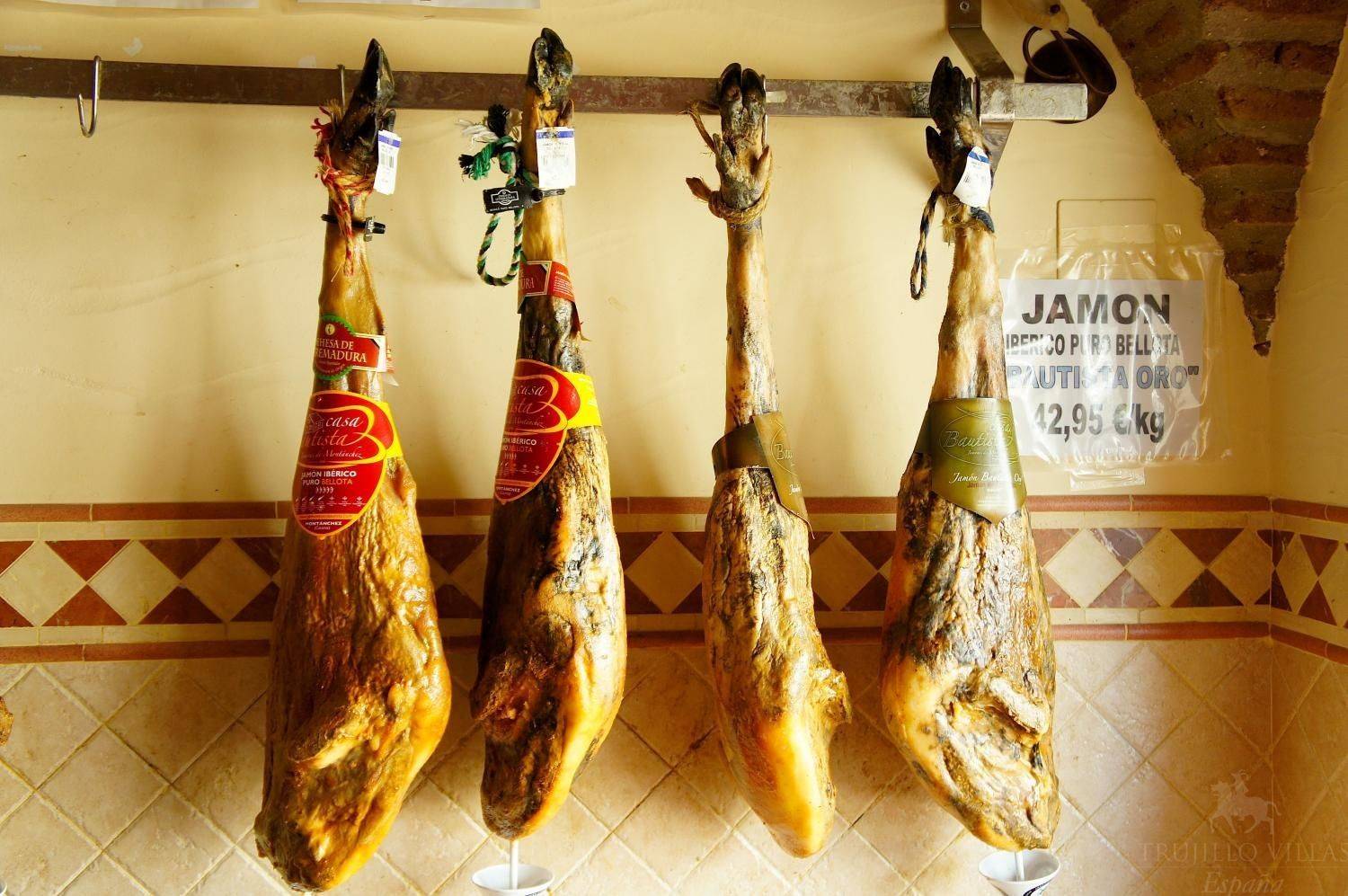 The Dehesa: A home fit for an Iberico pig

Extremadura has millions of hectares of “dehesa”, plantations of holm and cork oak trees which are the source of its most prestigious product – hams and sausages from the iberico pigs fattened on acorns in the area over winter months. The dehesas are a Spanish national treasure: large areas of forest partially converted to pasture, hundreds of years old, with rolling grassy hills amidst crops of acorn-producing oak and cork trees.

Trujillo is right in the heart of jamón country and jamón iberico de bellota is a local delight.

In the world of Spanish ham, there are two premium classifications: Iberico pigs and acorn-fed pigs. Unlike white pig breeds like Serrano, black-skinned Iberico pigs are descendants of the Mediterranean wild boar, colloquially called “Pata Negra”, characterised by the black hoof on the leg.

Iberico pigs are athletic animals, runners and rooters, and thanks to the structure of their intramuscular fat, their meat is flavourful, juicy and distinctive. Iberico pigs are also expensive. They have smaller litters and take time to mature, which is why many ham producers around Spain cross-bred them with other varieties. Up until recently, ham made from pigs that were as little as half-Iberico could be sold as jamón Iberico, but new legislation now requires Iberico ham to be labelled according to the percentage of the pigs’ Iberian ancestry. Of all commercially raised Iberico pigs, only 5% are both pure breed and acorn fed.

Jamón Iberico puro de bellota, acorn-fed pure breed Iberico ham is some of the most expensive ham in the world. It’s intensely sweet, floral, earthy and nutty like good Parmesan, with fat so soft it melts in your mouth.

Acorns: The secret behind the softness

The oak and cork trees produce the “Bellotas”, nutricious acorns that fall from early October to early March. The acorns are high in fat, a large percentage of which is unsaturated oleic fatty acid; and eating them is what makes the pigs’ fat so soft and creamy, on the verge of melting at room temperature. Acorns also contribute to the ham’s nutty flavour and aroma and are as essential to the product as the meat itself.

Over 18 to 24 months, the pigs will root around the dehesa, grazing on grass, mushrooms, bugs, herbs, whatever they can find. From October to March, the montanara, or acorn-dropping season begins and the pigs march into action. Fatty acorns are the pigs’ favourite food and with a mandated five acres of dehesa per pig, there’s plenty of room to look for them. By the pigs’ second montanara, they’ll have feasted enough to reach their kill weight, about 360 pounds.

Managing the pigs is not just left to nature, inspectors pay anonymous visits every two to three weeks to check on their treatment and diet. They also sample the pigs’ fat to analyse its oleic acid content—too little and the pigs won’t meet quality standards, too much and they’ll be impossible to cure into ham.

For most, curing is a matter of tradition

The curing traditions in the traditional jamón houses in small towns around Trujillo are centuries old and highly skilled. You can still see hundreds of hooks on ceilings from times when ham was cured using just natural air-flow. Nowadays there are huge jamón drying barns, some climate controlled but most using the traditional methods.

Once slaughtered, the ham-bound legs are skinned, salted, rinsed, dried and sent to the curing cellar where they will remain for about a year and a half. Skilled specialists monitor the curing cellars at all times, noting fluctuations in temperature and humidity.

Then Comes The Time…

Before any ham leaves the cellar, it gets a sniff test. A trained nose can purportedly detect 100 aromas from a premium ham, some sweet, some meaty, some nutty. Different regions of Spain have their own hammy terroir, and even different cuts of the same leg bear unique aromas.

With a short, stubby needle called a cala, the ham sniffer pokes down to the bone, quickly takes a whiff, and covers the breach with a smear of fat. There’s just a second or two to detect the balance of sweet, earthy, fermented, and floral aromas that signal a well-cured ham, and only a ham that passes the sniff test in four inspection sites makes its way out the door. If anything goes wrong, the nose knows.

Carving Spanish ham is an artisan job of its own. Jamón Iberico shouldn’t be sliced by machine—the soft fat would sheer out and the lean, bony legs make horizontal slicing difficult. The perfect slice is carved by hand, nearly see-through and small enough to eat in one bite. The fat melts in your mouth! 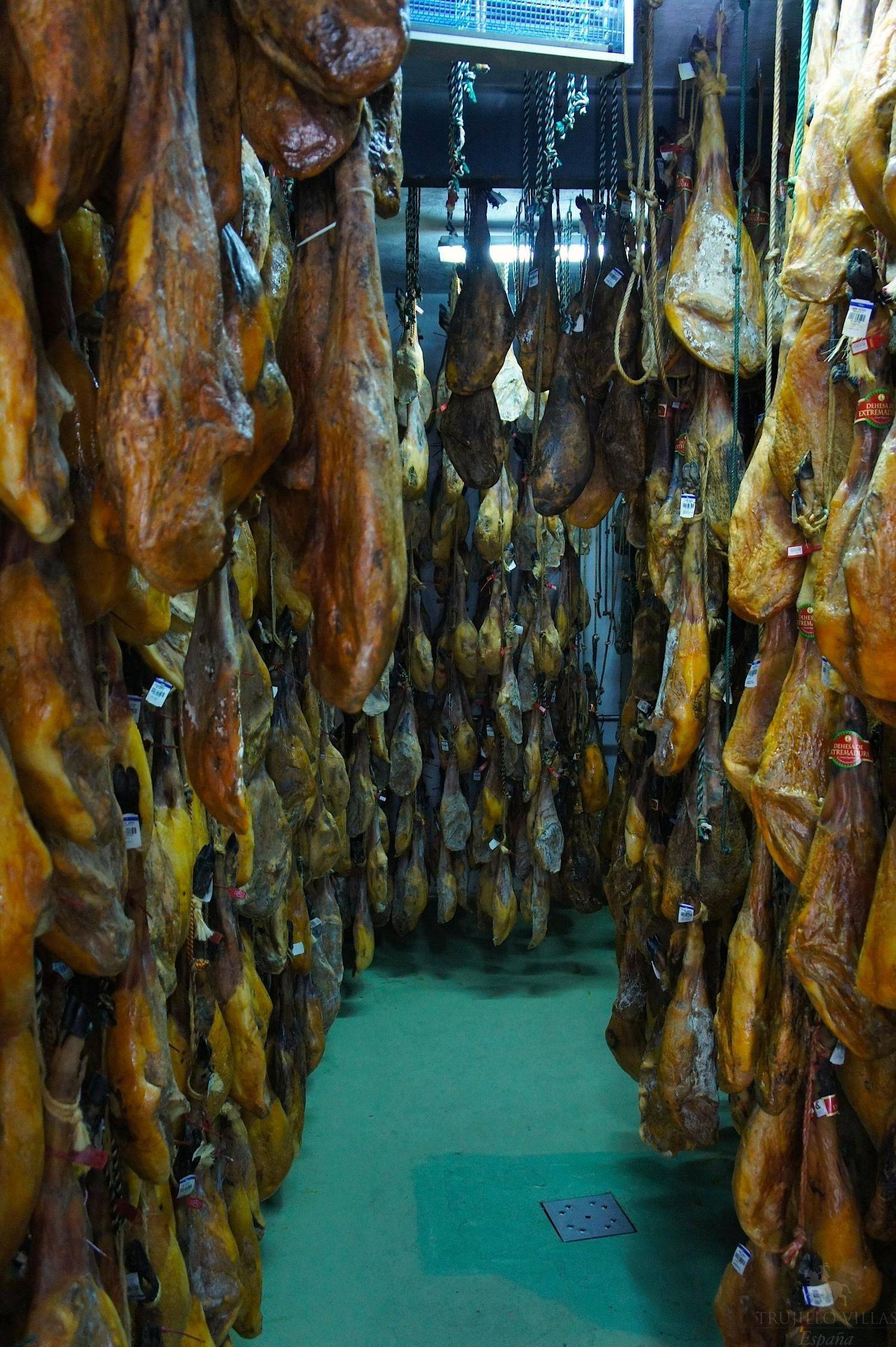 Trujillo – A region steeped in history and culture, with delectable cuisine

Trujillo Villas España are the sole provider of luxury holiday villas in Trujillo – come and visit us for all of the culture, medieval history and wondrous cuisine that this region offers, whilst enjoying luxurious and lavish accommodation. We recommend enjoying your Iberico ham in your villa, by the pool or in a local restaurant with a glass of manzanilla sherry. Enjoy!

Foodie legend Marina O’Loughlin was a guest of Trujillo Villas in 2015. Read about her jamon experiences and stay at Villa Moritos.