Trujillo Villas Espana, with five restored villas in the Medieval town of Trujillo in Extremadura in south west Spain is introducing new excursions in the Monfrague National Park in 2017. 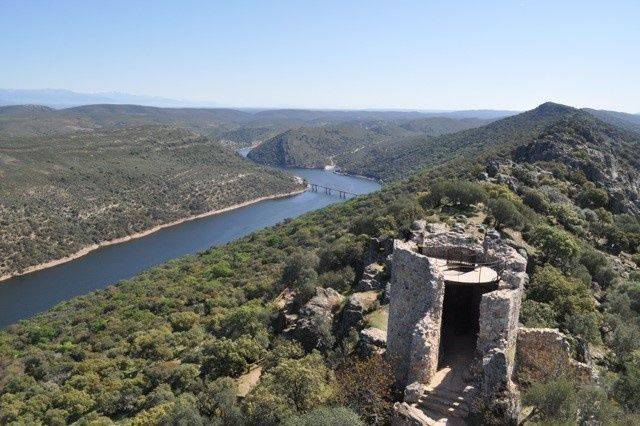 Relatively unknown in the UK, the Monfrague National Park was granted national park status in 2007 and has more than 45,000 acres of parkland stretching along the River Tagus.

Monfrague is considered to be one of the largest and best-preserved Mediterranean forests in the world, surrounded by cliffs, oak covered woodlands and scrub, rocky river gorges and streams.

It is famous for its collection of black vultures, the Spanish Imperial Eagle, black storks and the Iberian Lynx – all of which are endangered species.

Trujillo is just 30 minutes from the park and guests staying in one of Trujillo Villas Espana’s five restored villas are now being offered three ways to visit the park together with a homemade tapas lunch including tortilla and empanadas:

An English speaking guided walk or drive through Monfrague visiting chosen viewpoints including the Salto del Gitano – a 300 metre quartzite outcrop rising above the Tagus River, Monfrague Castle, Bridge del Cardenal and the Portilla del Tietar, while learning about the history, flora and fauna.

As well as many birds of prey, there are also 280 species of animals inhabiting the park, including wild boar, otters, wild cats and deer. The three and a half hour trip costs £40 per person, based on a minimum of two people and includes the picnic tapas lunch.

Visit Monfrague at night and look out from the keep of the 12th century Castle Monfrague to learn about the sky at night.

An English speaking guide will offer astrological and historical information and finish the evening with drinks and tapas under the stars. The three and half hour trip costs £50 per person, based on a minimum of two people including the tapas and drinks.

Monfrague is a dream for keen birders. The park is home to thousands of birds of prey, including the world’s largest colony of black vultures and the world’s highest concentration of imperial eagles.

Also resident in the park are the Black Stork, Egyptian Vultures, which are an endangered species, Griffon Vultures, Peregrine Falcons, Great Bustards, Black Kites and Golden Eagles. Trujillo Villas España can organise a three and a half hour guided birding trip from £40 per person, based on a minimum of two people and including a picnic tapas lunch.

Where to stay in Trujillo

Trujillo is a medieval walled hilltop town overlooking the plains of Extremadura three hours south west of Madrid. The town was home to several of the 16th century conquistadors, who discovered the Americas and still remains relatively untouched by modernity and tourism.

A Florentine arched loggia overlooks the square, ideal for al fresco dining and there is also a private walled garden with lemon trees and a swimming pool. Prices start from £357.50 per person per week, based on eight people staying.

Or stay in the restored Artist’s Studio with contemporary interiors from £297.50 per person, per week, based on two sharing.

Prices of the excursions are based on self-drive, but return transfers can be arranged at a cost of £40 per person. Subject to availability.